The Frenchtown Green Team’s “Bring Your Own Cup” Film Series continues with a screening of “City21: Multiple Perspectives on Urban Futures” on Friday, September 21, at 7 pm at Frenchtown Borough Hall. 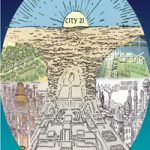 e producers of the award-winning documentary Ecological Design: Inventing the Future, comes an update documentary on cities today: City 21. This film production arises from a worldwide learning journey that was transmuted into cinematic composition illuminating some of the key perspectives and initiatives that are re-shaping the ethos of the 21st Century City. The underlying quest of the filmmakers is to reframe the conventional and uninspiring visions of the urban future, with an unprecedented combination of fresh, invigorating, sustainable, economically viable, and life enhancing concepts. For more information about the film, go to https://city21.info/

Christopher Zelov, the director of City21, will lead a discussion following the film.

Don’t forget to “bring your own cup” and we’ll fill it up with coffee or tea provided by our sponsors, The Bridge Café and River Blue Café.