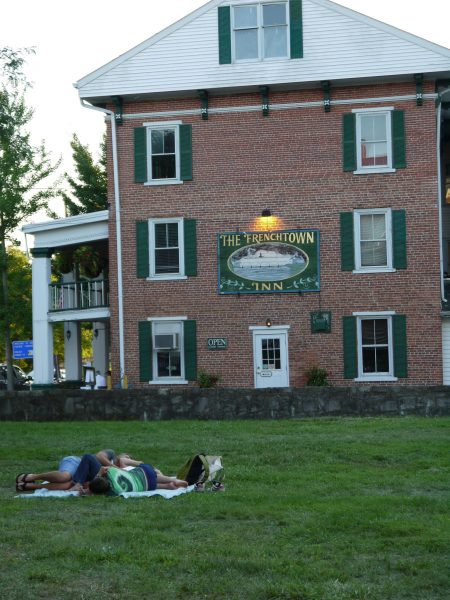 Frenchtown Borough was formed by an act of the New Jersey Legislature on April 4, 1867; but of course our history reaches much further back.

The Lenni-Lenape tribe were the original inhabitants of the area, living along the creeks, including our Nishisackawick. But by the 1750s they had been squeezed out to points west, and ferry service had been established here.

At the time of the Revolution, a hamlet named Alexandria or Alexandriaville had developed, consisting of a ferry landing, a half-dozen houses, two mills powered by the creek, and a store. Thomas Lowrey owned it all.

The 968 acreage that roughly corresponds to what is now Frenchtown, was sold by Lowrey to Paul Henri Mallet-Prevost in 1794. Except for the store lot, Mallet-Prevost owned it all. Everyone there was a tenant, squatter or an associate of his. 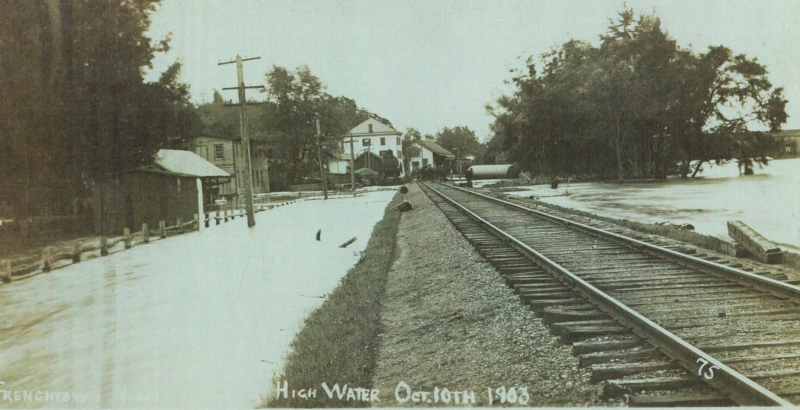 Mallet-Prevost, who was Swiss, had fled France to avoid a date with the guillotine. Joining him in Alexandria were his wife, Jeanne, three sons, and several other French-speaking families. The sudden influx of French-speakers gave the growing settlement its current name, which became official in 1839 when the Frenchtown Post Office was established.

In the 1800s, Frenchtown grew as a commercial center for surrounding farmers and as a manufacturing center, shortstopping some of the timber that was being floated down the Delaware as huge rafts, and processing the local oak and hickory. Frenchtown sawmills were busy, and factories were turning out tool handles, doors, brooms, carpets, chairs, liniment, carriages and even cigars. But the big industry was wagon wheel spokes, with several mills producing them. A foundry was making plows and stoves.

The town’s position was enhanced in 1844 when a covered bridge connected it to Pennsylvania and to the nearby Delaware Canal. In 1853, the railroad arrived to connect Frenchtown with Trenton and Phillipsburg.

In 1867 the borough was created, by cutting off part of Alexandria Township, with more acreage added from Kingwood in 1876. In 1883 the borough bought an 1845 chapel from the Presbyterian congregation and converted it into our Borough Hall, which is on Second Street.

Frenchtown had three hotels – the Railroad House/Warford House (now the Frenchtown Inn), the National Hotel, and the American Hotel/Temperance House. They accommodated travelers and provided low-cost housing for more-permanent residents. 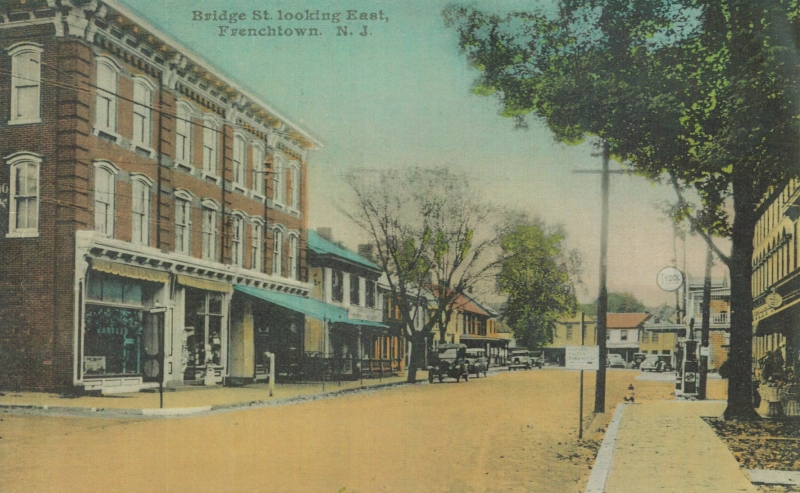 The Great Fire of 1878 destroyed six houses and about 20 businesses, including the Temperance House, the Press newspaper office, and the bank. Raging between Bridge Street and Second Street, it was a costly setback. Like the Chicago Fire of 1871, which was NOT started by Mrs. O’Leary’s cow, the Frenchtown Fire was NOT started by Dr. Deemy’s horse, although there was speculation. But however it started, the fire cleared the way for more-substantial development, with brick replacing wood.

In 1903 the Delaware River rose and swept away one-third of the covered bridge, which was replaced with steel. It continued as a hybrid until 1931, when the bridge was rebuilt entirely of steel.

The upriver forests and local woodlands were depleted of timber by the end of the 19th century, which meant the end of most of Frenchtown’s wood-based industries. But the 20th century brought two new industries – a porcelain factory and several chicken hatcheries. Soon the hatcheries were producing and shipping millions of chicks, and Frenchtown Porcelain was turning out faucet handles, spark-plugs and other electrical ceramics. The paper mill in nearby Milford also employed many residents.

When Frenchtown High School opened in 1926, local scholars no longer had to commute by train to Lambertville to complete their high school education. This new primary and secondary school also served some Pennsylvanians.

Our biggest deluge ever occurred in 1955, flooding many homes and businesses as the river and the creeks overflowed their banks. Kerr Hatcheries lost costly equipment, a quarter-million hatching eggs, and 7,000 chicks. There were rowboats on Trenton Avenue and Bridge Street.

But at mid-century the borough’s trajectory changed. Its industries were waning, railroad service was dwindling, the high school moved out of town in 1959, and better roads had opened shopping options elsewhere. The railroad ended passenger service in 1960 and freight service in 1976. Frenchtown was in decline. By the late 1970s, half of the storefronts were empty, and the housing stock had seen better days. New garden apartments off Trenton Avenue stood uncompleted. 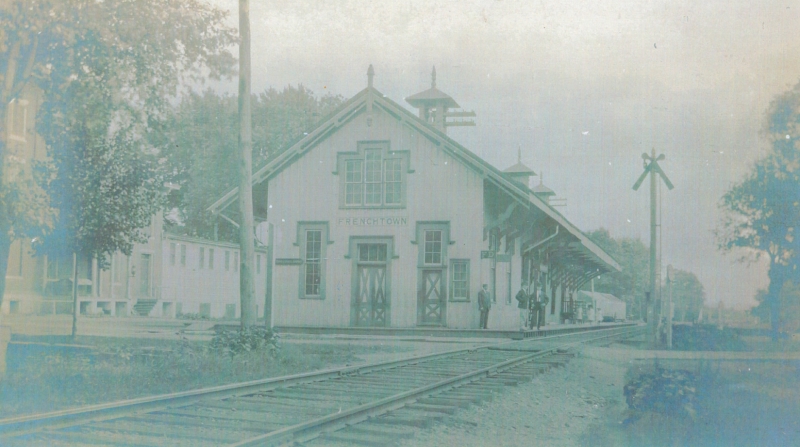 Then around 1980 a few antique shops opened up, followed gradually by galleries, boutiques, and enhanced restaurants. The railroad tracks were taken up in 1979 and in 1984 the state converted the railroad right-of-way into a riverside trail, perfect for walking and biking.

The quaint 18th-century architecture, the beauty and fun of the Delaware River, and the tempting dining and shopping options, were proving irresistible to visitors. While many came just for a weekend at the local B&Bs or inns, others put down roots in Frenchtown and vicinity. Property values rose, and many houses and commercial buildings were restored or rebuilt. The Frenchtown Business & Professional Association’s Bastille Day celebration, and later its Riverfest, Zombie Crawl and Christmas-tree lighting, augmented the traditional Memorial Day and Halloween parades. All these attractions have made Frenchtown a destination. 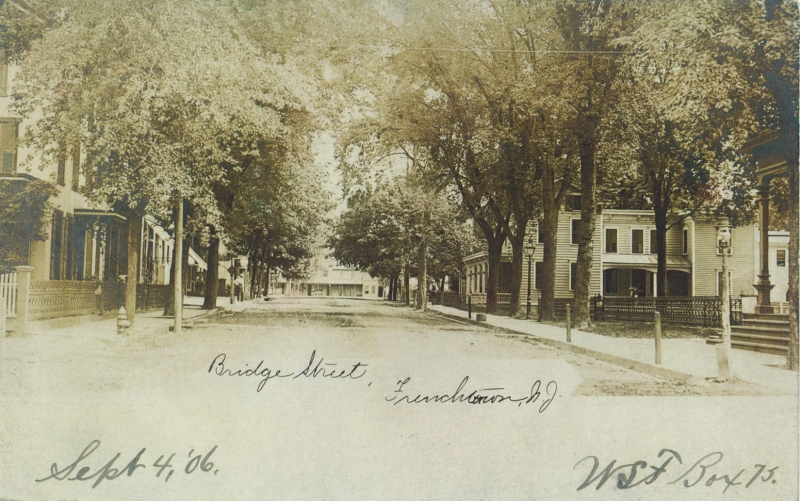 Frenchtown’s connection to the arts goes back to the 1930s when authors James Agee and Nathanael West decided it was a good place to write. Agee rented a house on Second Street to finish “Let Us Now Praise Famous Men,” and West spent a couple months at the Warford House (now the Frenchtown Inn) finishing “Miss Lonelyhearts.” More recently Liz Gilbert wrote “The Signature of All Things” (2013) when she was living on the ridge overlooking Sixth Street. Fine artists of note who’ve had studios downtown include Paul Matthews, Allen Saalberg and Charles Klabunde.

In 2016 ArtYard, a nonprofit dedicated to cultivating artistic creativity, bought property in town and began staging exhibitions, showing films, and more, operating in temporary quarters on Trenton Avenue. ArtYard is currently building a $10 million theater/gallery a block off Bridge Street. It is sure to add strength and variety to Frenchtown’s already exceptional cultural appeal, natural beauty and commercial viability. 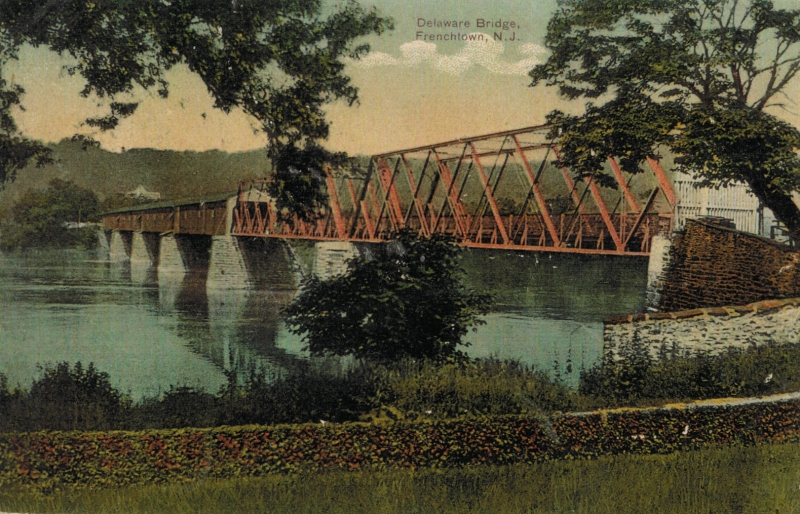 This look back was prepared by Rick Epstein, a student of local history. He came to Frenchtown in 1977 to be editor of the Delaware Valley News and stayed on and on. An historical artifact himself, he conducts walking tours of downtown Frenchtown and the cemetery. He can be reached at RickEpstein@yahoo.com.

Thank you to David Miller for providing these wonderful photos.